This is an article by brave activists and feminists in the Ukrainian, who used the European Day Against Trafficking in Persons for an abolitionist action they took to the German Embassy in the Ukraine. It has appeared on their Facebooksite (No prostitution! Feminists for the Swedish Model /НІ ПРОСТИТУЦІЇ! Феміністки за шведську модель) both in Ukrainian and English, and on Abolition 2014 in German, English and Ukrainian. Traductoras para la abolición de la prostitución published the text in Spanish

No prostitution! Feminists for the Swedish Model. 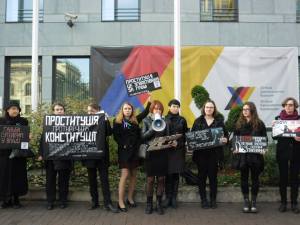 October 18 is the European Day Against Human Trafficking.

On that day we – ukrainian feminist-abolitionists*- came out to the Embassy of the Federal Republic of Germany to protest against the trade in women in Germany. We came out because in German brothels men are given the possibility to legally rape women, including from Ukraine. Yes, we consider prostitution to be rape for money, a crime against women, incompatible with human dignity and a threat to the welfare of people, family and society – as stated in the UN Convention**.

The Government of Ukraine has taken a number of measures against trafficking: developed the Anti-Trafficking Program for the period up to 2020, increased material assistance to victims of trafficking, introduced the Plan of additional measures of fighting against human trafficking and concept of institutional development in the sphere of trafficking-related crimes. Due to these measures, during 9 month of 2017 almost three times as many corresponding criminal proceedings were opened as during 12 month of 2016. However, we have little doubt that the majority of trafficked Ukrainian women reach the destination – countries where prostitution is fully legalized (or where clients have no responsibility for buying women’s bodies for sex), as in Germany or Greece.

Yes, we have our local problems too: the issue of prostitution doesn’t receive enough attention from the authorities; sex tourism is flourishing; no liability is foreseen for buyers. Prostituted women face an administrative fine in Ukraine, but it is insignificant, and women are much more afraid of getting their names known. There is a criminal liability for pimps, but it seems that big “dealers” in Ukraine feel confident enough.

This confidence is evidenced, in particular, by the apparent increase in strip clubs quantity on the streets of Kyiv in recent years, and their massive advertising on the streets and in public transport literally in the last year. Strip clubs are known to be doors to prostitution. Advertising promises rather high salary for Ukraine, but we know that in order to earn that money women will have to sell their bodies, not just dance. It’s quite symbolic that one of the strip clubs, namely Rio (according to rumours, it belongs to the family of the mayor of the capital, the former world-famous boxer Vitali Klitschko), is just across the embassy of Germany.

The problem is that voices of those who favour the legalization of prostitution are getting stronger in our country. Some people don’t see any problem in filling the budget by exploitation of women’s bodies, others believe to promises that legalization will protect prostituted women, ensure their rights and free from stigma. We wish it could, but the example of Germany, the Netherlands and other countries where prostitution was legalized or decriminalized, proved the opposite. At the same time, the existence of the Swedish model, with criminalization of buyers, is unknown to people in Ukraine, or this approach is manipulatively criticized.

Even assuming that a miracle will happen and Ukraine will introduce the Swedish model – will it stop the trafficking of Ukrainian women into Germany? No! Because demand is the reason for the existence of prostitution. As long as there are countries where this demand is supported there will be prostitution, and men will sexually exploit women and children.

Legalization only increases human trafficking. Legalization cannot control the spread of HIV/AIDS and other diseases. The state that legalized violence becomes a pimp, and no wonder that Germany has received the title of „European brothel“.

In memory of the women-victims of prostitution in Germany, today we laid a wreath under the walls of the German Embassy and honoured them with a minute of silence. Their suffering, their lost lives are on the conscience of men who sell, buy and sexually exploit women, and on the conscience of the state, which looks at it with wide-open eyes. 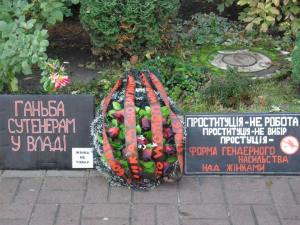 We also want to express solidarity with German abolitionists, who like us, are struggling against legalized prostitution and trafficking in human beings, and to say that such a scenario is inadmissible for Ukraine.

Slogans on our posters:

„Women in brothels of Europe are our sisters“

Thank you to our activists, Елена Лягушонкова for organizing, posters, speeches, and the press release I used partly here, Maryna Reznikova for the speech, Natasha Nerus and Olga Tverdokhlib for a photo, Anastasia Melnyk for printing information materials, Anna Cho and Ольга Гайович for the requisite, Olena Zaytseva for translation and communication with German abolitionists, Manu Schon and Inge Kleine Reed for advice and information support, Александра Горячева, @Anastasia Gorash-Bulanova, Viktoria Ryabchun, Alice Valert and another member who wished to remain anonymous – for participation! Women, you are wonderful, brave, I am proud to be acquainted with you!

Ein Gedanke zu „The Women in the Brothels of Europe Are Our Sisters!“